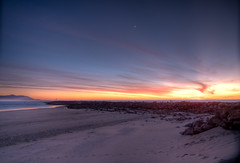 This is right next to “Morro Rock” in Morro Bay, CA. I believe I have the map information in the flickr photo. Morro Rock is this giant granite formation that is visible from quite a long distance and possibly larger than the town itself. Much of it was cut up to create the small marina/harbor and even parts of the town. Yet it’s still quite large. The entire rock wall in the image was created from it.

Morro Rock is now a protected area, as many Peregrine Falcons nest there.

My wife and I were very lucky that the clouds worked with us to create this spectacular sunset. I had my camera on a tripod and took, I believe, the equivalent of 45 photos of the sunset. It was just so stunning for such a long time.

The reason why I say “equivalent” is because this was the first time I used a method known as “HDR” or High Dynamic Range, first introduced in Photoshop CS2. Essentially, digital cameras can capture a certain range of tones, from detailed shadow to detailed highlights. HDR allows you to take a series of photos – from ones set to get maximum detail from the shadows to ones that constrain the highlights – and then merge them all together into a photo that is not otherwise possible.

A look on flickr for HDR can show you some of the results, many of which, honestly, are not pleasing because they are unrealistic, in my opinion, and overdone.

I tried to go for a more natural look. I was also trying to compare against what I can do “in camera” without digital manipulation, using the tools that were available before Photoshop came along. The primary method was to use what are called “graduated neutral density filters.”

These filters essentially allow you to decrease the amount of light coming in from one area (in this case, the sky) while getting “normal” exposure in other areas (the beach). I had 4 “stops” (quantities of light, where each stop is 2x the amount of light as the previous one) of filtration. The HDR image was created from 5 exposures (so 5 stops).

I will try later with a 4 stop HDR image, but there is a noticeable difference in the detail in the beach with the HDR image vs. the one made in-camera, with just filtration. I thought that was pretty interesting. That even with that much effort, with that much filtration, I still couldn’t get it the same as with digital manipulation.