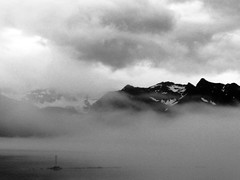 My wife and I went on a cruise to Alaska back in late August, 2008. We took many, many, many photos the whole way through. I used a digital SLR with three or four lenses I brought. She used that, too, but also a Panasonic Lumix TZ3, which is a point-and-shoot with a big 10x zoom on it. Very handy and great to have around, but in all honesty you aren’t going to confuse images from the two cameras often.

On the very last day, we docked in Seward and left the boat. It was a foggy, grey, and rather unpleasant early morning. However, because the TZ3 was just in her pocket, my wife pulled it out and took this great photo of the pier where we docked. It looks a lot better in black and white because it was rather dim and the lighting was 10 different colors, but it says a lot about just having a camera handy. Better than no camera at all or the one all zipped up in the backpack. I love the feel of this photo.