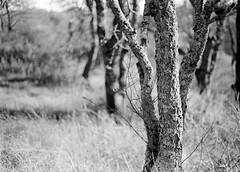 This is from my second batch of tests to find a “holy grail” of b&w film and developer. This was taken just last weekend while hiking through Alamaden-Quicksilver Park in San Jose. It’s a great park in that it has a lot of different trails, several grades for variety, and the sun moves in and out for the most part. I took a slightly different route this last time and will be doing a review of that route soon.

As for the photography…one of the great benefits of 35mm film is that the cameras are small and portable. The downside is that with a relatively small negative size you need excellent sharpness to stand up to enlargement. And with sharpness comes grain.

Well. Guess not. Sharpness is good – excellent perhaps – but the grain is still more than I had hoped. I will try this with some slower, finer-grain film (this film isn’t fine grain to begin with – I was hoping to tame it) but will also move onto other developers.

It was a beautiful hike regardless.