One of the most popular and perhaps famous camera formats out there is 6×17. This is medium format film, which is 6cm tall that is shot in a really wide camera and a big lens, producing a 17cm wide image. Nor surprisingly, it’s very panoramic in appearance. Many famous photographers have used cameras that shoot specifically in this format. Thomas Mangelsen, whose photos adorn our walls at our apartment, is the first that comes to mind.

Most of these cameras come in at a minimum of $1500. And that’s for a chinese company (Fotoman) – the “name brands” are thousands more.

I wonder if there is something about shooting a camera that is a particular format that makes one compose differently.  Would I compose a specific way, looking through a viewfinder on a 6×17 camera than if I were looking through one with a much bigger frame and trying to imagine cropping?

Recently, I found a homemade 6×17 camera that looks very intriguing. 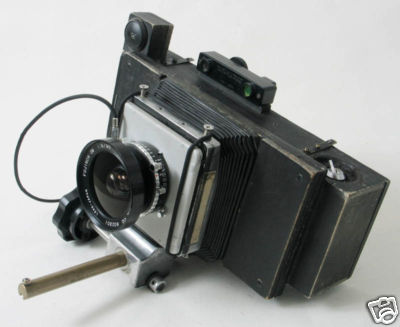 In case you read this after the ebay link goes away, essentially it’s a 6×6 camera (common format) that has been cut in half and expanded, an enlarger bellows (the expanding part which allows the lens to move back and forth for focusing) and a large format lens.  It’s a real frankenstein’s monster of a camera, to say the least. And as of right now it’s a “steal” at $400 compared to those other ones, and the examples the seller gives indicates this camera can do some nice stuff.

And, since this camera is built the way it is, it’s not any more portable than my 5×7, which folds up into a small box, basically.  In fact, the 5×7 is more portable (though I need a bigger bag anyway).

So…in reality, the 5×7 makes sense.  However, will I find myself thinking and composing differently looking through the viewfinder on the 6×17 than I would at the big 5×7, life-sized ground glass on the back of my large format camera, trying to imagine what it would look like cropped?

credit the guy who made this – image basically taken off ebay