This will be cross-posted to tripadvisor in order to share my thoughts, and stroke my ego. 🙂

The standard phrase is to not judge a book by its cover.  This is usually about not being negative based on appearances.  Sometimes, however, it goes the other way.

I stayed at the Inernational Plaza Resort and Space in Orlando for the Eduause Conference, which is coming to a close today.  When I first arrived, i read about the 2 pools, the hot tubs, the jacuzzi, the min golf course, and even the putting green so that one could get ready for a round on a neaby course and called my wife to tell her how cool the place was.  It really had a tropical feel.

However, after just 1 night the cracks started to show through, an indicated of a hotel that hasn’t been kept up as well as it should.  For instance:

The good news is that the pillows are soft.  And that the carpet wasn’t any dirtier than usual.  So I guess that’s a plus.  I would not recommend it.

On the way to work (kinda): The news this morning

On the bus to Educause this morning, what I presume to be the local easy-listening station was broadcast.  The following stories were covered

And now we’re up to date on the news.  So apparently, along with information on who will be our next president, this squirrel must have been really important.

I went to costco today to pick up some snacks for the office.  While there, I saw that they had a much wider variety of items than usual.  A LowePro camera bag for a great price, some new cameras, etc.  And…a Flip Video Ultra unit.  I’ve been wanting one of these for a year at least, and it’s something we legitimately want to try out at work so I got it.  Sure, I’ll use it a bit for my own stuff to “test it” but it is for work, and I have good reasons to try it out.  So I grabbed it.

Now…a few months later, while at Educause, I am seeing how I could have used it had I thought for about it for a second and brought it along.  A small but not-too-small form factor, very good video quality, and the easiest darn controls out there.  It’s a really impressive unit.

The only thing I wish I could do is hack is for 2 hours of recording.  Go back to the lower quality compression used in the original Flip that gave 1 hour in half the capacity.  Then, we could roll these out as set-it-up-yourself video recording for classes.  Think about that – short of a major infrastructure installation for recording, we just hand one of these to a professor and voila.  Our classes are all more than 60 minutes so we’d need that hack.

Great product.  Wish it had that one feature, though..

McCain: listening to a campaign speech today. What the…?

This isn’t a “political” post.  I’m not bashing or supporting either side (I did vote for Obama, and I don’t like McCain, but that’s not the point here).  What I’m not getting is how McCain can say something over and over and over, not changing what he is saying, when I truly feel like he’s just digging his hole deeper and deeper.

I’m listening on CNN right now about stuff he said today.  He says a number of things which I just don’t get.  Specifically:

So…I really feel like Obama has made his case on the whole “if you make less than $250,000 your taxes will not go up” thing.  It’s something that people grasp – it’s got a dollar figure on it.  I think it’s fine that McCain wants to argue that Obama wants to raise some taxes, but this blanket statement just doesn’t really make sense anymore.  Maybe he could say “he’s rolling back some tax cuts – what if he keeps going?” or something like that.  But I think he’s beating this horse pretty badly.

And the bridge to nowhere is…in Alaska.  And while I think I read something about how under her governorship she just let it happen, as compared to making it happen (hey, that happens – she hasn’t been governor that long), the point is that…the pork barrel thing, the bridge to nowhere, THE EXAMPLE HE GIVES, is something that happened in Alaska.  Weird.

Don’t get me wrong – I think he makes some good points in his stump speech.  I don’t agree with his tactics, but I think some of them make sense.  I just don’t see why he’s making these particular points while stumping.

Possibly best description of what an instructional technologist is

What is an instructional technologist? at bavatuesdays

Jim Groom does a tremendous job describing what an “instructional technologist” means to him, and I think it’s a pretty damn good description in general.

Me?  I think I’m someone who could have been an instructional technologist but is equally passionate about administration and doing administration the right way.  So maybe that’s the way I go.  And hopefully I’ll have a “Jim Groom” working with me while I’m handling the administrivia.  Someone that passionate about doing that kind of work.

educause 2008: oversleeping is the theme so far

This has been a frustrating educause in many ways.  I have met up with many people.  And many of them even remember me from the various times we’ve met in the past, which is in some cases surprising.  And almost all of them have been great with whom to speak and share ideas.  That part has been excellent.

But I have overslept for 2 straight days, missing the first session each, and I didn’t get out to some of the events last night.  And I flat-out forgot a discussion group I meant to go to last night (though I did so while chatting with someone so that’s not a bad reason.

So far it’s been positive, but the oversleeping from jet lag is really annoying.  It’s been hannging onto me like a foggy cloud for at least a day longer than I had expected.

Edit:  I’m actually having a great and productive time here.  Just was grumpy this morning.  I am frustrated about the jet lag.

Random post – I just installed Thwirl on my PC side on my macbook so that I could use that to post to twitter while at Educause 2008, rather than via the Yoono sidebar extension on firefox, which I have installed on the mac side.

There is a solid 20 second gap between when tweets show up on Yoono vs. Thwirl.  The latter is much slower.  Very weird.  And unfortunate.

One of the new shows this fall that has at least piqued my interest, if not actually capturing it, is Eleventh Hour, starring Rufus Sewell (of Dark City fame) and Marley Shelton (of cute blonde-in-Pleasantville fame and apparently cute-blonde in general fame).  I’m not sure yet if I like the show, but one thing the did appreciate in the beginning was that Shelton played this tough, serious FBI agent.  Admittedly, she was too tough.  Too “I always do my job because I’m bad-ass” throughout the pilot.  I am presuming they were juxtaposing that seriousness with her hotness (she is pretty hot, and there is one “running around in her bra and her FBI dress shirt scene” so it’s kind of obvious). She is also clearly merely tolerant of Sewell’s character Dr. Jacob Hood, who is eccentric but a genius.

However, in the second episode has her as a much, much softer character, and even warning Hood, at one point, to be more sensitive in a particular situation where he’d be working with parents who had recently lost children.  They made her less serious and hardcore, in other words.

A few years ago, I was reading about the rise of the strong female lead in television shows.  I believe Kathryn Morris Cold Case, Marge Helgenberger in CSI, Jill Hennesey in Crossing Jordan and a few others were mentioned.  I would add a few others, such as almost any of the characters in The Womens Murder Club.  Yet here we are, with a show where the female character has been softened up.

The show isn’t that good to be honest, so it’s not a big deal, but it’s kind of sad, too.  Shows go back to being formulaic…

soft towards the light 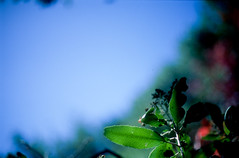 soft towards the light

One of the standard guidelines for composition is the “rule of thirds.” Basically, you divide the frame into thirds, both vertically and horizontally. You then place the subject at one of the intersecting points. This helps you to think about composition other than the middle of the frame, and to fill it more with the subject.

I often go with like a rule of fifths, where I put something even closer to an edge. Another composition method I’ve been using is to have more empty space than not. This one is actually closer to the rule of thirds but I used the big, empty sky which has this subtle yet smooth and rich blue to offset the foliage in the foreground.

Sometimes I don’t think I have a style. That I’m just a mishmash “snapper” that just snaps often enough to get a good photo now and then. And maybe I am. But maybe I do put at least some thought into it. Sometimes.

OPEC concerned about “protecting” oil prices. Are you kidding me?

So they are decreasing oil production to maintain and “protect” the price of crude.

We are so far up the creek on energy dependence that I don’t even know what to say.  I was re-reading the pros and cons of one of the propositions in this year’s election, which would increase the adoption of natural gas as a measure to reduce our reliance on foreign oil.  Even though it’s a pretty blatant prop for the energy plan from T. Boone Pickens, I’m not sure that’s a bad thing unto itself.  It’s still a sound plan.