This is a really fascinating article.  Essentially, it is about how the training and education of MBA students to examine the bottom line – return on shareholder value – rather than ethics or a higher standard of management over the last few decades has led to a group of leaders that have run companies into the ground, taken too many risks, and put us into our current crisis.  The article does acknowledge that lots of those CEOs’ classmates have not done things to damage our economy to the benefit of shareholders, and lots of CEOs without MBAs have.  But the basic premise is that there is a push back against formally trained individuals because they are taught to look at dollars instead of ethics.

This is a pretty difficult topic for me.  I’m in an evening MBA program right now, but also work in academia, which is not generally driven by the bottom line and certainly not by the pursuit of profits/return on equity to shareholders.  On the one hand, I am still generally taught that the goal of a CEO is to make money for shareholders.  Those are our clients, we find customers to buy our products, and we try to make money for people who have invested in the company.  Plain and simple.  However, at no point have I ever been taught that this is the only goal for a CEO.  It might be the primary one, but not the only one, and not more important than, say, doing business in an ethical manner or taking risks beyond what one’s organization can hold (such as being leveraged 30 to 1 or offering products that sell now but are missing the point for the future).

At the same time, even at the Jesuit University at which I attend school, I do not have a single business ethics course as part of my requirements for graduation.  There is one elective that has not been offered in the two years I’ve been here.

Personally, I think that anyone who is a good CEO, or a good candidate for one even coming out of biz school, should realize that there is a right way to do business, and such practices should be pursued, not ignored.  Even if one bends a rule here and there to make sure the company hits the earnings estimates for the year by delivering a product at 12:01 AM (outside of the quarter that ended at 11:59PM…), that’s a mile away from driving GM into the ground, or creating an idiotic financial monstrosity that was Lehman Brothers.

Scott Bourne (no relation to Jason) is kind of all over the place on the internet, though I knew him first from This Week in Photography, which has a useful though sometimes-remedial podcast (I couldn’t think of a word that didn’t sound derogatory in some way – it’s just not geared for tech heads like me and sometimes I am listening to stuff I already know).

After my recent trip to Thailand, I find this article pretty useful.  Now, I wasn’t ready to be quite on a photo-trip – no photo vest for me or anything like that.  We were vacationing, and photographed a lot while we were there.  But we were not there for photography.  But this is a useful guide nonetheless. 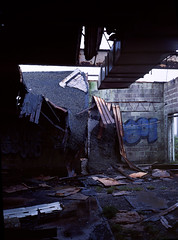 Sweeney Ridge, recently added to the Golden Gate Recreation Area, is an interesting park. First, the on major trail is paved for a big portion of the way. Only after you have climbed up steadily for about an hour (really kills the legs) does the trail split. One way heads towards the point where the bay was first seen by explorers…a long time ago. The other continues along the paved path towards a Nike Missile Radar Station, long since abandoned. What’s amazing about these empty buildings, falling apart with graffiti and caved-in ceilings is that they are completely accessible. One can walk right in and wander around the carnage.

I’ve been reading about China’s attack, if you will, on the dollar as a reserve currency (kind of like a central currency for everyone, which can be easily converted to any other currency, and that acts as a relative “safe haven” to be kept in other countries’ central banks).  Most people say that at best the yuan is a couple of decades away from having that much clout.  The euro is way ahead of any other currency at this point and is highly convertible but is only 1/3 or so of how many transactions are done via the dollar (so currency A>dollar>currency B).

I think part of this is simply that China is making noise about the depreciation of the dollar as the government spends like crazy.  Eventually, inflation will catch up to the stimulus (stimulus initially causes appreciation, though it’s not quite as simple as that) and all of China’s dollar-based assets will be worth less.  But it will be a few decades probably before we get out of our deficit, and at least half of one before we’re done with deficit spending (i.e. – making our deficit deeper)

As has been the case with China for decades, it remains a “paper tiger” until it puts some substance behind its words.  But when it becomes a real tiger, watch out…

Sometimes, it really does help to be composing in a particular format.

My panasonic LX3 has a “16×9” mode that gives me this panoramic look. Even though I know I can take the regular, full frame and crop it, looking at the screen while in 16×9 makes you see things differently, I think.

In this case, I could feel the symmetry of the mountains on either side with the boat in the middle much better, I think, than if I had a much more square frame and just tried to visualize.

This was taken while sitting on Bophut Beach on Koh Samui, in Thailand.

On the one hand, a 15.2% annualized drop is…staggering.  Mind-blowing.  Mind-numbing.  On the other hand, the article makes a good point in that everyone expected a huge hit since the country has responded to expected decline in exports very aggressively.  They have closed plants, not just decreased production.

Also, the current account, which is roughly defined as exports-imports, has dramatically shifted for Japan.  Before, they were likely running a CA surplus, since so many of their products are exported to the US, China, etc.  But suddenly those exports have dropped and while they still might be in surplus (I don’t know, to be honest) they might also be in a slight deficit now.  When a country is trying to balance its internal monetary and fiscal controls and its desired level of the current account (which of course impacts the internal economy, since a CA surplus means higher production and employment, etc), changes in the CA can be really devastating to a country that has relied upon a surplus for so long.

“The Fed says it expects the economy will shrink between 1.3% and 2% this year. It had earlier said the economy could contract between 0.5% and 1.3%.”

So that’s…good news?  That we will contract more than what they said earlier?

“It also warned that US unemployment could reach 10%.”

Definitely not good news.  Especially since “real” unemployment, which would include discouraged workers and those who haven’t actively tried to find new jobs for more than 3 months (but of course are still unemployed) is always higher.  And forget about those with jobs that they are forced to take, at lower wages and worse hours, just to make ends meet.

“Participants agreed that the information received since the March meeting provided some tentative evidence that the pace of contraction in real economic activity was starting to diminish,” the minutes showed.

It is critical that this be interpreted correctly.  First, the observation is that the contraction is still going on, but is showing signs of slowing down.  That means we are still in actual recession (with negative GDP growth/GDP shrinkage) much less in an economic malaise (which will last longer than the actual recession, which is technically over after we hit bottom and start the slow climb up).  But the economy is still contracting, just not as badly as before.

Second, what this does mean is that most of the areas that have been battered lately have finished…being battered.  So the loss of construction work, for instance, is finally basically all gone and no longer contributes to negative GDP growth.  Now, that means that people don’t have jobs, but it means that they have already lost their jobs, not that they are still losing them.

Finally, we must not take this as a sign that we can stop working hard to jump start the economy.  A second major stimulus is probably needed (the ARRA is pretty back-loaded as it is, though at 3% of GDP this year and next it’s not small, either) and we can’t lose sight of that just because our contraction is slowing down.

This is actually not that surprising, but still upsetting.  I believe Facebook actually now claims the right to use your photos for their own promotional purposes.  Flickr’s API allows others to display photos without attribution, even if your license, set via Flickr, requires such attribution.  It’s really a mess.

I just resign myself to the fact that if I put a photo online, it’s a free for all and I consider myself lucky when people to attribute my work to me.  Sigh.

adding value to my photography business

Rather than go about slashing prices in this economy (at which point it’s not worth the trouble, to be honest), I have been trying to add value to what I do as a photographer.  One thing is to offer on-site printing.  I can do this in a number of ways, but being able to actually see the image on the computer and then hit “capture” would be nice.  This free software is intriguing.  Now if I could only get a few more bookings.

Alameda, by Oakland, is a little island that used to be one giant naval base. The vast majority of repairs for the Navy took place there, apparently (I’m still looking up the history for more details). It hasn’t been used for that purpose for quite a while and the various hangers and buildings there are now used for all kinds of reasons. There is one hanger that is some kind of super-sized sports facility, for instance. All around the hanger is fencing blocking off other restricted areas – just yards away. Playing indoor bocce with a restricted access construction area just outside. Pretty weird.

The old traffic control tower building, shown here well after the sun had set, is now the home of a wind energy company. Of all the places to use as a company headquarters…