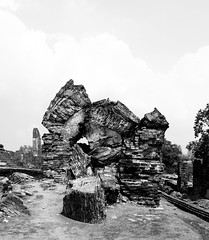 Around the late 1700’s, Ayutthaya, at the time the capital of what is now Thailand, was sacked after the second of two vigorous attacks by the Burmese. Following, the city was basically burned to the ground, many of the Wats and palaces were destroyed, and raping and pillaging was rampant. The Thai are quite sore at the Burmese about this to this day. To rub it in, the Burmese prince that was leading the army had a big Wat built outside the city to commemorate his victory.

Very little of the original grand palaces and temples still stand. Those that do are either restorations or badly in need of them. This particular mass of bricks – you can’t even tell what it is anymore. It now looks like a combination of a transformer made of bricks or some kind of rock monster.