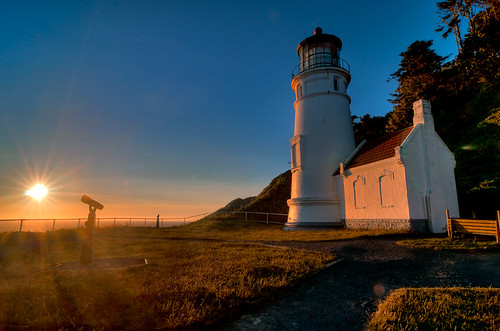 Our fourth day on the Oregon Coast had us driving from Bandon to Yachats.  Overall, Yachats is a pretty good place to stop.  It’s past Florence and the dunes, and the coast makes a definite transition to a less rocky landscape, with softer beaches and finer sand.  It’s also a good distance from Bandon yet still leaves a lot of distance until a next major stop, such as Depoe Bay or even farther north.

The truth is that after getting beat up by the wind at Bandon, we took it easy on this drive.  First, if it’s possible, we spent too much time photographing around Bandon, trying to catch every beautiful moment from sunrise to sunset.  Second, I wanted to devote a good amount of time to Shore Acres State Park, which many tell me is the one place they’d go for even an entire week.

Everyone says that one needs to be ready for just about anything in terms of weather in Oregon.  We were ready for rain, we were ready for gloom.  We weren’t quite ready for tremendous wind, but weren’t complaining since it came along with clear skies and the sun.  Something else we weren’t expecting was such calm seas.  Now, we had waves, and in Depoe Bay we had some good blasts of water now and then.  But we never got the massive waves crashing into the sheer cliffs kind of experience that everyone told us about.  So Shore Acres, known for its big cliffs…was a bit of a let down. 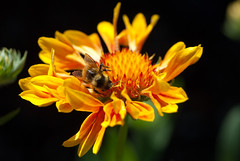 I will say that the park there really is quite impressive, though, and it was one of the times we really had a chance to break out the macro lenses.

To top it off, the sun actually wore us down a bit.  So we didn’t get big waves and got worn down by the wind and the sun.  So we hit the road and went straight past Coos Bay (including past the Coos Bay Bridge, which I wanted to photograph but reached at the worst time of day, in terms of light).  We stopped off here and there, but overall just kept looking for nice vista points and a good place for a sunset photo.

We did make one stop that sounded quite nice in the guide book – Sea Lion Caves.  This is a pure commercial, private tourist trap.  But, according to the book, worth it.  You go down this 200 ft elevator ride to what is supposed to be the largest sea cave in the world.  What we got was one of the most powerful, overwhelming assaults on the olfactory nerve we ever experienced (i.e. – it smelled terribly).  The sea lions were cool…but not that cool.

We did get a pretty good look at Heceta Light, though, which became our major sunset location later on.

We did only a few short trips around the dunes by Florence, by the Takenitch Lake, which gave some interesting compositional options (though again under poor light).  Downtown Florence was remarkably well developed though touristy (we considered going back but unfortunately did not).  Might be worth a visit some other time.  The bridge by Florence makes for some quite interesting compositions. 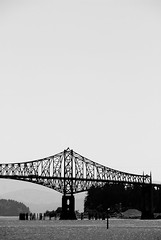 And that brought us to Yachats.  There, we stayed at the Shamrock Lodgettes, just south of the river.  I have to admit – if I were to pick one city that we visited along this trip to which I’d consider moving, Yachats would be it.  Just big enough to have some good places to eat and a legitimate downtown-y area.  Small enough that the good place to eat is called Luna Sea and the great breakfast place we ate at is this overcrowded diner-y kind of place (which is actually organic and all green, too, but that’s coincidental as far as I’m concerned, based on the atmosphere).  And Yachats is on the river and on the ocean.  This would be my place.

After a great tuna melt and some “super chowder” (with parmesan cheese) from Luna Sea, we headed back to Heceta Head point to photograph at the lighthouse.  There are a couple of things about Heceta point.  First, it’s almost impossible to spot while driving north on 101 – the ocean and the head is off to the left, but the exit is to the right with a small sign.  It’s far easier to spot heading south, which is a good thing since that’s the way we were going from Yachats. 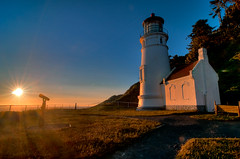 Second, the information in the Photographer’s Guide (which is 5 years old, I fully acknowledge), is really not very useful here.  It talks about the great views one can get by basically climbing up behind the lighthouse to get the warm light of the setting sun hitting it.  These “trails” are all carved out by other photographers, not by official rangers, etc.  Well, after the remarkably easy walk up to the point, it turned out that the entire back of the lighthouse has a fence around it, and it’s impossible to get back there.  I worked a bit more to get a shot, but eventually the real sunset shot came back down on the beach. 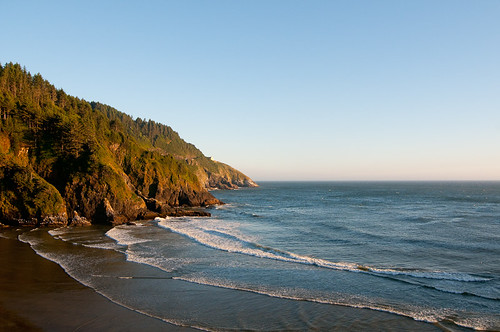