I am extremely late in getting this last post out about our trip to Oregon.  This was in June, for gosh sake’s.  But I owe it to the trip (which was so great) to send out this last little bit, with a few more photos.  My hope is that I show off what can be done as one moves up and down the coast.  Yes, there were parts we liked more than others, and there are parts we wish we had explored more.  But we did 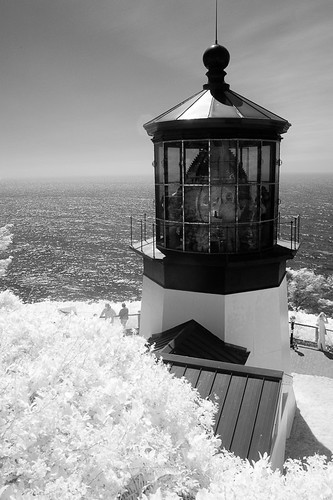 all of this and the previous posts in just 7 days, including driving to and from home in Santa Clara.

We spent 2 nights in the Three Capes area, which is to the west of Tilamook and includes Cape Kiwanda, Cape Lookout, and Cape Meares.  These are all accessed via the “Three Capes Scenic Route” which splits off from 101 at Tilamook in the north and reconnects just before Lincoln City to the south.  It’s not a fast drive, but it’s not a winding one, either, so it’s quite a feasible detour.

Over the two days, we saw all three capes, drove by Netarts Spit (but didn’t quite make it out there), saw Three Arches Rocks and crawled through a sea cave et still never saw all three arches, was by the Haystack Rock at Cape Kiwanda, and did an amazing hike down Cape Lookout.  We also went to Sandlake Beach, which is quite nice and secluded.

To be honest, I’m not sure this area is worth 2 days – I would have probably preferred more time in Yachats and some time in Florence, and still done the 2 days in Bandan.  But it’s worth it to go to the Three Capes and find out for one’s self whether it’s the right place or not. 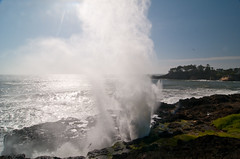 The day began with breakfast at Whales Rendezvous in Depoe Bay.  We loved this place, and loved breakfast.  It’s served in the room.  We didn’t want to leave but had more of the coast to see. 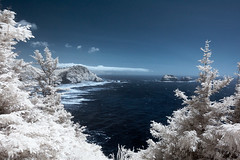 We arrived on the afternoon of day 6 at the Sandlake Country Inn B&B in Pacific City.  This is a country location – if you’re looking for a fresh, clean, brand-new, hotel-but-cozy kind of B&B experience, this is not for you.  The reviews on tripadvisor indicate that.  The one couple that really hated it clearly did not research the location very well.  Right outside just about any door were fields of grass, a small stream, wonderful trees, and birds chirping everywhere.

Paula, I believe, who runs the Inn, is a fun woman with whom to talk, a very professional proprietor, and an AMAZING cook and baker.  Breakfasts were wonderful both days, including the second morning, when we left early to drive all the way back home.  She was very accommodating and friendly.

There are, I think, three rooms at the Sandlake, with a big central living room area on the first floor, complete with wood burning stove-type fireplace that can really warm the place up.  Our room was the Rose Garden room, on the first floor, and right off the living room.  Despite its proximity to the common space, it was still private and quiet.  The room also had a whirlpool-jet bathtub, which was fun, especially after the first day of driving and walking around.

As we did for most of the trip, we drove up from the previous location (Depoe Bay, in this case), stopping along the way and headed past our actual lodgings.  We then would go back and get settled, then head out again usually for more sight-seeing and usually sunset followed by dinner.  Since the three capes should have had quite a lot of things to do, we figured we’d need an extra day.

Throughout the trip, we seemed to have rather bad timing.  We reached the most photogenic locations just at the worst time of day re: lighting, or were dead tired and decided to cancel this or that spot.  This continued on our way to the three capes.  At Cape Kiwanda, the smallest of the three, the place was overrun with families playing on the beach, driving on the beach, and all over the cape itself.  Not that I was upset about this – it’s not a “photographers only” location or anything.  But it looked like a pretty nice photo spot but didn’t work out.  So on we headed.

Cape Lookout was quickly identified as something to do the next day, as it’s basically one big long out-and-back hike straight down the cape.  Cape Meares is the most…stubby of the three, being more of a round knob sticking out rather than a big spike, like Kiwanda and Lookout.  Because of this and because the road basically leads right to the tip of the cape, there wasn’t that much to actually do at Cape Meares.  We photographed the lighthouse, got some good views of the ocean, but that’s about it.  There is some general walking that can be done around there (I wouldn’t even call it hiking) but that’s about it.

Sunset that evening was low-key, at least partly because we felt we had gotten some great sunsets already over the previous days, and because we couldn’t agree on the right spot.  There isn’t as much in the foreground from the scenic drive itself, so it would be the sun setting into the ocean, and it was cloudless.  We thought about Netarts Spit but it seemed like a bit of a walk.  We ended up just focusing on dinner, which was at the River House across…the river.  Great food, and highly recommended.  We almost went there the second night as well.

The next day was much more laid back than the rest of the trip.  We slept in until about noon, then went to Cape Lookout for the hike.  For some reason, the only cloud cover that makes it over the hills spills out over that particular cape.  It was always shrouded with a thick cover, but when the trail opened up we had this tremendous view, mostly to the south.  We made it about 3/4 of the way before turning back (my back started to ache a bit – too much time in a car over the past week).  Worth the trip, for sure.

Our final “day” was our drive home.  As I mentioned above, the hostess at the Sandlake prepared a breakfast that we could take with us when we left early.  On the way out, there was this magical mist coming off the fields.  I’m lucky to have caught some of the images… 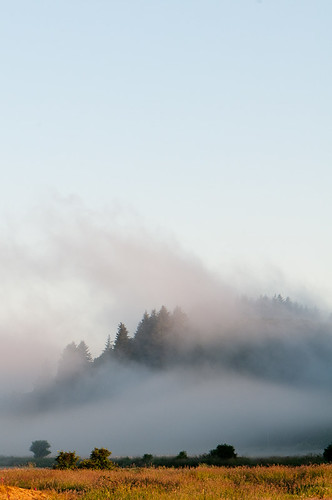