Due to driving times, we decided to take the shorter drive first, to Brookings, just over the border into Oregon, and head north along the coast.  Most people and certainly the two books I have seem to head south instead.  But a 7.5 hour drive seemed a lot more manageable than an 11 hour one. 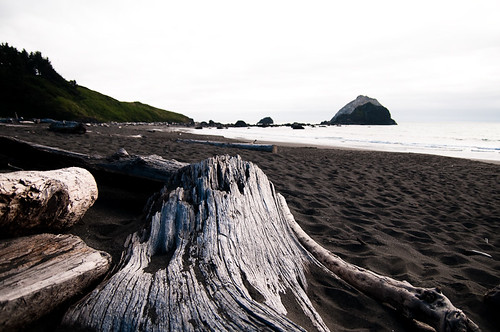 We got to Brookings about 7:30 or so in the evening.  Sunset is very late this time of year – about 9PM, so we were able to check into our motel, get to a decent restaurant, and still “see” the sunset.  I use quotes because clouds completely obscured the actual horizon so we didn’t see the last hour or so of the sun going down.

Our goal was to get to just a basic motel that first night – out goal was to find a place to sleep, not about the view or anything like that.  Turns out that most of the hotels and motels in Brookings are exactly that – functional as last stops on trips down the coast, with few frills.  The exception is the Best Western, where all rooms have a great view, so I hear, but it’s maybe $175 a night.  That’s pretty steep for a Best Western.

We stayed at the Ocean Suites Motel, which turned out to be an excellent choice.  Some of the reviews on TripAdvisor are before the current owners, who actually live on site (when I called to say we’d be checking in late, they even said to just knock on their door if they aren’t at the desk), have made it a lot nicer.  Even so, the reviews are really positive.  Don’t be fooled by the website.  Now, this isn’t the Ritz, or even a Best Western, but it is a suite, with a sofa bed, queen bed in the bedroom, sink, fridge, and quite a bit of space.  It was very nice to be able to unpack the car and just spread out in the room, without having to worry about squeezing this bag into that corner to make sure things weren’t falling everywhere.

We at dinner basically across the street at Smuggler’s Cove.  Not surprisingly, this is a seafood restaurant.  The service wasn’t great and bordered on bad, except that I do believe we were the first in a huge rush that overwhelmed their staff.  That’s not an excuse – I still almost got up and left.  But I could tell what was happening.  The food was pretty solid – my wife and I both had seafood pasta dishes.  She had it with the Cajun sauce and it was fantastic.  They gave me the cream one (I also ordered the Cajun but oh well) which was a bit bland but they give you a lot of seafood.

Not a lot to see in Brookings, but it was a good starting point (and I think would make for a great base for a future trip, based on my experiences on this one).  Glad we went that route at the time, though the drive back at the end – 14 hours from roughly the Tilamook area – was where we paid the price. 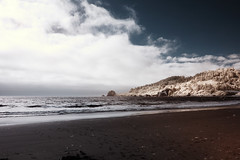 What I learned myself that I didn’t from others:

This is the section where I talk about what others told me, and what I learned for myself.  First, Brookings is really just a stopping point.  There isn’t much there, and clearly people don’t treat it as much more than a starting or stopping point for a coast trip.  Second, even if the Best Western has a great view, I can’t imagine it’s worth it.  I’d rather stay in a nicer place and then in a nice hotel with a great view, rather than have a great view in kind of a dead town.  It’s a good place to serve as a base camp at an affordable price for the lower coast.  But that’s it.  And yes, the Ocean Suites is my recommendation, easily.