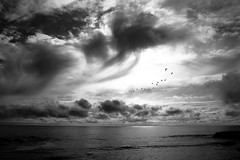 The Nikon D50, one of the best digital SLR’s Nikon has produced, in my opinion, was our first DSLR. We got it right before a wonderful Hawaii vacation in January 2005.

When I was ready to upgrade, the D50 was selling for maybe $250 or so. Not really worth it, to be honest. And it wasn’t worth it to keep around as is since I was making a pretty big jump. So I decided to pay $150 to have it converted over to an infrared-only camera. It is only sensitive to the near IR spectrum of light and allows me to shoot handheld. Usually, one gets really long exposure times when doing digital IR.

The conversion has produced some really useful applications. One is with skies. The clouds become even more dramatic against an IR darkened sky. Conversion to black and white makes it all the more dramatic, I think. Also, because we have a more sensitive camera in the first place, I can take shots where birds and other moving objects are frozen and still.

It’s actually kind of a funny process, shooting digital IR. IR sensors are inherently overly sensitive to near IR spectrum of light. So manufacturers put a “hot filter” over the sensor, which blocks that part of the spectrum. Those that want to do digital IR then put an IR filter, which blocks most of the visible spectrum, in front of the lens so that only the near IR comes through. This means that a tiny sliver of the spectrum actually hits the sensor. Which means incredibly long exposure times.

In a converted camera, the hot filter is taken away and, in my case, replaced directly with an IR filter. So now it’s just a straight, near-IR-only camera with great sensitivity.