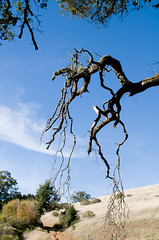 I say exploratory because I really was going in for just a short, 4-5 mile hike to see what the place was like.  How shaded, what kind of foliage was there, etc.  I also went relatively late in the day – about 2.5 hours before sunset – so just looking around was about the most I could do.  You can get a PDF map of the park if you want to follow along with my review.

As always, I planned a route and managed to take a different one anyway.  It was not quite the featured hike from the bahiker.com link above, but my goal was to take the Stevens Creek Nature Trail just to the White Oak trail and be back.  That would be only about 3 miles or so.  However, I got a bit waylaid and turned onto the CAnyon trail rather than making the right onto Stevens Creek.  I eventually looped back onto the Stevens Creek Trail and back to the parking lot.

The signage in the park is really quite confusing – I honestly could not figure out which junction I was at most of the time.  I also managed to sprain my ankle when I thought I was about halfway, which made me keep going.  Turns out I was about 1/4 of the way, and should have just turned around…

The park is a very nice place to hike.  Bikes are allowed on many of the trails but no horses for the most part, and it wasn’t very crowded even for a Saturday afternoon.  You walk in and out of tree cover so it’s not a hike exposed to the sun.  Also, Stevens Creek is just a trickle now but apparently moves quite a bit of water in the winter and that all feeds into a great big bloom of wildflowers in the spring.  Even now, in late November, there was decent greenery and some small amount of flowers about. 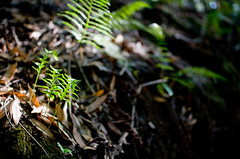 The trails can be a bit narrow 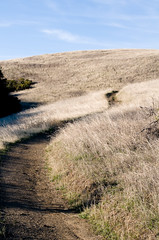 as one walks around and you have to make way especially if a bike comes around, but they are more than manageable and in a way it’s part of the park’s charm.  It’s not that crowded (perhaps the windy road dissuades some people) so the trails aren’t huge, nor are there tons of trails that lead off into nowhere.

I will be visiting it again soon.