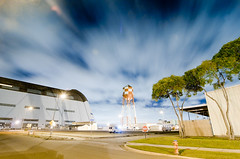 Photographically, I really like this photography and am very satisfied with it on a number of fronts. At the same time, it was an…emotionally conflicted evening for me.

At first, because I forgot my cable release for my digital SLR, I wasn’t going to even bring it along. I was going to just shoot with my medium format and film. However, someone convinced me to bring it to the NASA station and I basically just set the camera to 25-30 seconds and fired away. This is the best of the bunch. The clouds were apparently moving a lot more than I thought and the distortion from the ultra-wide angle lens actually enhances that effect. The “daytime”-ish feel of the photo is just a basic color correction from what was a very yellow & brown image (the types of lights there produced that).

So in terms of the good luck of bringing the camera in and the carefree way I took the photos, it was very satisfying. I just let myself go from the technical side of things and just composed photographs I liked.

On the other hand, for some reason, I didn’t enjoy myself as much as usual while I was out shooting. Usually, I am excited to get out of the house, especially since I am in school and so busy all the time. This time, after just a couple of hours of shooting, I was ready to pack it up and get out of there. Just tired.

I admit that I am a bit worried that I found myself less motivated about something that has been my passion for years now. But this is just one evening, and one time out. We’ll see. 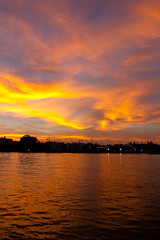 This will be the first of several, several posts of photos from my Thailand trip. This blog will likely turn into 75% photos for the next few weeks, with sprinklings or links to articles like I often do and then a few actual, personal, original posts.

We had this terrific hotel right on the river, on the Thon Buri (west) side of the Chao Praya river that runs along side the main part of Bangkok. It is called the Ibrik (eye-breek) Resort on the River. 3 rooms, 2 with patios with incredible views. Highly recommended.

With the time change, we had no problem waking up really early and often caught tremendous sunrises. This one just blew us away, and it’s difficult not to post about 50 photos from it and the following days. This is the very first morning we were there, right from our patio.

The skyline is of Old City in Bangkok – where the temples (wats) and the Grand Palace is. We were facing that from our side of the river. Storms were always just about to reach us so there were always clouds to help with the magnificent reds and oranges and yellows. The river made for a nice foreground, of course.

This is another photo taken while walking to work. One of the challenges of this effort is that I walk pretty much the same route everyday, with little variation in what I see, etc. So I don’t always get a lot of stuff to photograph.

This time, however, I had to stop by another building first, in a different area, and so walked a different route. I went by this building that is all red and yellow. It has this shopping cart behind it and the sun just was intense and coming from the side.

I don’t generally photograph head on but sometimes it works.

I leave for Thailand tomorrow so expect a LOT of photos from that trip :-).

Cruising under the Bay Bridge 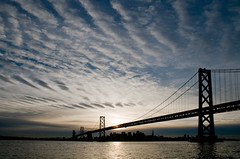 Cruising under the Bay Bridge

I don’t think I’ve ever blogged this photo. This was on the 2nd day I had my Nikon D300, which I still consider to be best non-FX digital SLR ever made. I honestly don’t know what they’d do in a D400, for instance, to make it better.

I was photographing a wedding that was taking place on a boat, cruising off of Alameda island. The sky was…stunning, the bridge was perfectly hiding the sun so it wasn’t going to flare and, with just a touch of correction to make the towers straight, this is what I got.

It was a beautiful day, I had the right tools in my hand, and this is one of my most favorite photos. It’s the wallpaper on the laptop I am using to type this, and on my blackberry. I opted for one of Morro Bay for my desktop machine at home. Had to mix it up a bit.

My latest purchase is the Panasonic Lumix LX3, a remarkable point and shoot camera. I bought it for a trip to Thailand coming up in March and am getting used to it now.

I’m not even out of program mode but some features are already really impressive. Turn everything off, and it’s a really straightforward point and shoot. Turn on a few things, and you have a real-time histogram, you can change exposure compensation with a little joystick to adjust, and you even have modes for aperture or shutter priority, or full manual (controlled by the joystick). Really nice stuff. And it shoots in RAW.

The most impressive part, however, is the lens. It is incredibly fast – 2.0-2.8 over its admittedly small 24-60mm zoom range. But that means that I can get decent results at ISO 800, which is unheard of for a camera like this, and definitely B&W-convertible stuff at 1600.

I took this photo while walking home, obviously after a short rain storm. Most of the ones I took that night I turned into black and white as they were quite noisy. This one I liked for its simplicity and kept it in color. 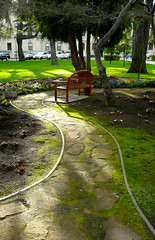 I have been trying to carry a camera with me everywhere I go. I think I’ve mentioned this before. Not as a “photo a day” project, as sometimes it’s a film camera, but the goal is to be ready when the light is right, when the scene presents itself, etc.

I walk by this bench and very small stone pathway 100 times a day. This time, the light was hitting it just right that it made me stop. I cropped the image a bit but this is all about the light.

And yes, I wish those cars weren’t back there. But I didn’t have a forklift handy so they stayed. 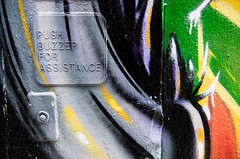 While my wife and in-laws went to “tea” at the Palace Hotel in San Francisco, I wandered the streets around there, camera in hand. I have been doing an alleyways project for a while and found a number that were heavily decorated. More than just graffiti – more like murals.

This one was different – it actually included the signage that was next to the door. Part of me thought this was great. It certainly is creative. Part of me wondered whether the braille letters would be as discernible having been painted over like that.

across the sea towards the ice

across the sea towards the ice

The last stop on our cruise to Alaska was to look at the giant Hubbard Glacier, which is easy to access even by large ships. It’s not so big that giant iceberg-sized chunks calve off of it, of course, but it’s still quite impressive.

Ice of course reflects the wavelength of light that hits it, so in color the glacier looks like this mess of black and very bright blue (the sky). The black is the moraine, which is all the little bits of rock that the glacier picks up as it grinds its way towards its end point. Actually, some of those bits are huge – Central Park in NYC was created by a glacier, and there are some serious boulders there.

It was a cold day and no, I didn’t get any especially impressive photos of ice calving, but it was still pretty neat to be that close to the edge of a glacier, after having actually hiked on one by Juneau a few days previous.

Between the reflections on the water and the ice itself, plus the layered look of the mountains behind, I thought converting this one to black and white worked well.

la lune and the photographer

la lune and the photographer

My wife composed this and asked me to pose while I was standing on this rock taking all these photos (1 & 2) of the sunset at Morro Bay.

I remember that the first photo she took I had my head at this weird angle that, while natural in terms of my own comfort, looked weird. So I did this somewhat exaggerated “turkey neck” pose to get myself looking like I was gazing off into the distance. The wistful, lonely photographer. Staring at the moon at sunset. Ah, so poetic.

My wife did a great shot, perhaps the favorite one of myself. Of course, I’m not sure if it’s saying something that my favorite shot of myself is a silhouette… 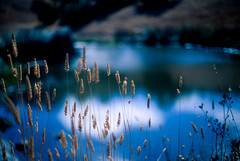 This is one of those photos where my own opinion was undermined by peer pressure. Of course I have a preference for my own photos – they are my “creations” and I take pride in them. But sometimes I take a photo of which I am really proud, yet no one notices and I begin to question myself.

This particular image got almost no notice on flickr, and no comments. It still hasn’t been viewed by many people (26 as of this writing) and I lost confidence in it.

Well, the fact is that I’m very proud of this photo. The shallow depth of field isolates the foreground reeds (are they reeds? no idea. the are long tall bits of “nature”). The colors reflected on the pond are really what I wanted, from the blues to the greens and the cloud. And the background, with the “land” appearing again, really works, I think.

This is another image taken while hiking – this time in Colera County Park. This pond is right at the entrance and is great for photos, in black and white, too.