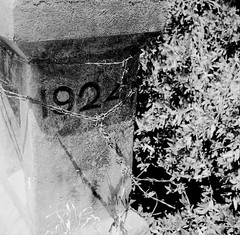 I am pretty sure I did a review of this trailhead before, but it was lost when the bulk of my blog vanished.  So this is just a short one, since I haven’t been back on this trail in a while now.  I found a roll of film that I shot while on a hike starting out from this trailhead into Alamaden-Quicksilver Park.

I was not particularly impressed by this trailhead, to be honest.  The trail starts off basically as a road, which means lot of joggers, bicyclists, power walkers, etc.  Of course, I have no problem with others that use these parks – none at all.  But it isn’t really a trail for quite some time.  The first photo here is of a post on a little bridge that makes up part of the path.  Again, it’s more than just a trail at the outset.

There are also a barn right when one gets onto the beginning of this trail, with at least one old, rusted out car abandoned there.  It’s not from 1924 – it’s an old VW Beetle.  But it’s still kind of cool.

Eventually, however, the trail does appear. I don’t know exactly the combination of paths I took, but I know I ended up on the Guadalupe Trail at one point.  This is a relatively flat path but it’s also out in the open, meaning that it’s hot and really tires you out if it’s sunny.  It’s not a particularly scenic route, either, though it has its moments. 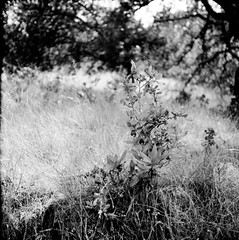 This second photo was taken somewhere along the trail.  I believe towards the beginning, before it opens out into the sun.  That part of the hike is pretty well covered, with nice foliage, big trees that hang over the path and provides pretty nice shade.  I am fairly certain this is the Senador Mine trail.

One thing I forgot to mention in my earlier post on one of the Almaden-Quicksilver hiking trails is that you come upon some interesting old mining facilities along the way.  In particular, there remains the foundation of what was one of the deepest water pumping stations that helped keep the mines usable in the area.  Not much left, but kind of interesting nonetheless. 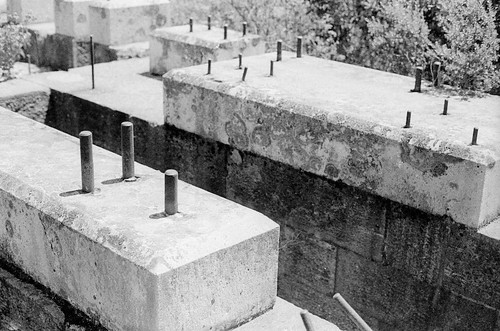 Well, this took a bit longer than expected. My first “major” hike through Almaden-Quicksilver Park in San Jose (location of trailhead) was via the Mockingbird Hill Entrance, from which I took the New Almaden Trail. The park map is very useful and detailed.

My actual path was to head southeast along the New Almaden trail, then south onto the Buena Vista trail, bearing left onto one of the branches that eventually led to the Randol Trail, then the Hacienda Trail back to the trail head. Total of about 4 miles. Most of my hikes are about this long, at least partly because I stop so often to take photos that I take a long time to cover those 4 miles. Trunk Stripped Bare.

This is a nice hike. There is alternating shaded and brightly lit areas (for example), which makes for a nice combination of hot and cool, which means you can go most anytime of day. The trails are not very steep. I chose the New Almaden trail specifically because it’s a hiking-only trail – mixed use trails, in my opinion, tend to be a bit too soft, even on inclines and declines, making it harder on the legs than if there were at least some rocks upon which to really get some traction. Actually, on the way back, along the Hacienda trail, which is mixed-use, I had a hard time dealing with what felt almost like loose sand as the path material. Next time, I’ll go the other way on the trail, heading over to the Norton trail instead. It’ll be about the same distance.

The only weird part is the Buena Vista trail. It?s narrow, very rocky, and sufficiently undeveloped (and therefore unhiked) that it felt like I had taken a wrong turn. I actually went back to make sure. The tree limbs were literally coming right over my head and wrapping around the trail. Very strange. By comparison, going through the “Capehorn Pass” off of the Randol trail didn’t seem like much of a pass. Buena Vista felt like it was creating a whole new path.

I intend to take this trail combination again, except going to the Norton trail at the end. I liked it much, and it was nice not going to the main Hacienda entrance that is most popular for this park. The photo ops abound all along the way, even in the harsh, dry middle-of-the-summer time of year . So keep some film or memory space left up until the end.